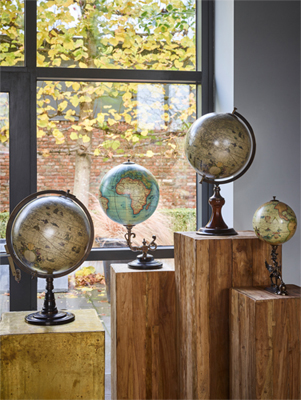 A beautifully handcrafted globe is both a work of art and a historical reference point. With different versions through the centuries reflecting new knowledge gained by explorers and new territories claimed by countries. Authentic Models is a world leader in antique globe reproduction, still practicing the traditional complex gravure printing technique developed to display fine details. Our collection represents five centuries of globe development by some of the greatest names in cartography, tastefully mounted on sympathetically designed stands to bring old world charm to even the most modern settings.

Geradus Mercator (1512-1594) studied at the ancient University of Louvain, then Netherlands, now Belgium. He published his first terrestrial globe around 1536, which introduced new concepts for navigation. The oceans and seas were covered with 'rhumb-lines', which assisted in setting a course. The 'Mercator' projection translated a spherical chart onto a two-dimensional sheet of paper. So revolutionary, it was used until very recently.

Jodocus Hondius (1563-1612) was a skilled cartographer who fled his hometown of Ghent after the arrival of the Spanish Inquisition. After a period in London, he published a world map commemorating Drake's circumnavigation of 1577-1580. Moving to Amsterdam during the 1600's, then one of the world’s commercial hubs, he purchased Mercator's copper plates from which he published a new atlas and updated globes.

Father, Gilles Robert de Vaugondy, and son, Didier Robert de Vaugondy, were the leading mapmakers in France during the 1700's. Didier was appointed geographer to Louis XV in 1760 and published globes of various sizes, the biggest with a diameter of 2.6 meters, 8.5 feet! Carrying science and history into the world of home décor. A unique combination of classic globe replica from historical cartography with spectacular decorative stands.

The reproduction of a Rand McNally globe from 1887 is characterized by its unique isothermal lines, which link areas of the world having similar temperatures. This cartographical feature was made possible in 1817 by the pioneering work of German Alexander von Humboldt.

Chicago was the center of American globe production in the first half of the 20th century, and Weber Costello was the leading cartographer at that time. His globes featured a distinctive and lovely color palette all their own. The world in 1921, roaring and still colonial. The Weber Costello globes are displayed on ebonized wood stands. Colored gores are applied to the globe by hand with authentic construction and detail which transforms them into contemporary classics.