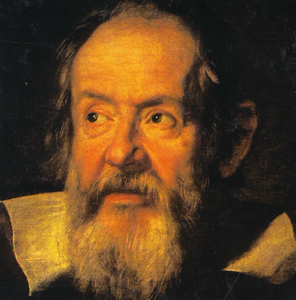 Galileo Galilei (February 15, 1564 - January 8, 1642) was an important Italian scientist who made fundamental contributions to the sciences of motion, astronomy and to the development of the scientific method. His insistence that the book of nature was written in the language of mathematics changed natural philosophy from a verbal, qualitative account to a mathematical one in which experimentation became a recognized method for discovering the facts of nature.

Galileo developed the astronomical telescope, with which he discovered craters on the Moon, sunspots, phases of Venus, and the satellites of Jupiter. His astronomical observations led him to espouse the Copernican theory that the planets revolve around the Sun. This conflicted with the teachings of the Roman Catholic church, however, and Galileo was forced to recant his findings and was placed under house arrest for the final eight years of his life for having “held and taught” Copernican doctrine. In 1992, the church formally acknowledged its error in condemning Galileo.

Among countless other discoveries, he succeeded in developing a thermometer that demonstrated that temperature has an effect on the density of liquids. This law of physics states that a liquid’s specific density changes as the liquid’s temperature changes.

The thermoscope, the world’s first instrument indicating changes of temperature was invented.  Today, modern science has perfected a 400-year-old principle and created a work of art – the Galileo Thermometer.  It’s science and art beautifully combined!