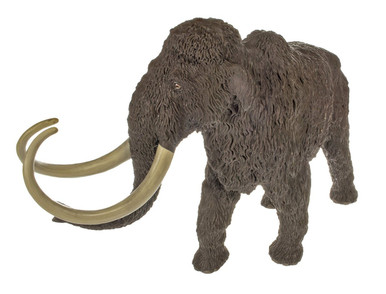 The Woolly Mammoth roamed North America, Europe, and Asia long after the Dinosaurs were extinct; it survived until 10,000 years ago. This 1:30 scale replica from Safari Ltd® presents the rough, woolly texture that gives this massive mammal its name. The woolly mammoth (Mammuthus primigenius) is an extinct relative of today's elephants that lived late in the Pleistocene Epoch, or Ice Age. Many details of its anatomy are known thanks to discoveries of largely intact frozen carcasses in Siberia. The distinctive fur that gives this mammoth its name was composed of a long, hairy outer coat and a thick, dense undercoat. The animals also had a layer of fat under their skin to further insulate them from the cold. The tusks of woolly mammoths were much longer and more curved than those of modern elephants, reaching up to 16 feet (5 meters) in length. Cave paintings in Europe show that ancient people hunted these huge plant-eaters.

This replica has been researched and authenticated by the Carnegie Museum of Natural History, Pittsburgh, Pennsylvania. Excellent learning tool to introduce young children to our delicate and often endangered inhabitants of our planet. A fun way to spark the innate curiosity of a child. Each replica is finely hand painted and accurate down to the last detail.